Cookies help us deliver our services. We do not share these cookies with any third party. By using our services, you agree to our use of cookies.
This website might contain content of explicit nature. It may be unsuitable for minors and those easily disturbed. You confirm to be a legal adult in your place of residence and acknowledge the potential risk to your wellbeing by pressing confirmation and browsing this webpage.
Jump to navigation

On the 1st of April 2021, Selebus announced Lessons in Dove on the official Discord as a new up and coming game. It is, however, merely a light-mooded joke parodying his own game, Lessons in Love, for Aprils Fools.

There has been some discussion floating around about how content of this new game might not be for everyone, but I understand that I've created a special community of people with special interests. And, as such, I need to do everything in my power to appeal to those people. The following screenshots will be spoilered for anyone who does not want to experience them.

But for all fans of Lessons in Love, I highly implore you to click at your own risk. This game means a lot to me and I hope it will to all of you as well.

Thank you for your understanding in advance. 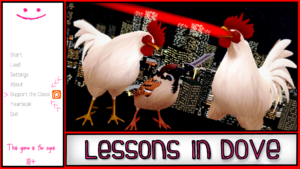 Lessons in Dove is a multiplayer action RPG that puts players behind the reigns Sensei once again. But this time around, his penis has been nerfed by 50% due to the outrage of imbalance from the community. Sensei has been tasked with Forming an avian extermination squad to take down a new threat to Kumon-mi. The game will feature many of the characters you know and love and will be fully voice acted by professional Japanese actors. 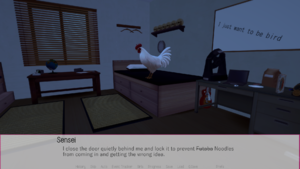 It will also feature COMPLETELY reworked scenes from Lessons in Love, rewritten from the ground up by none other than myself. Any resemblances they have to the original content of LiL are purely coincidental and I can promise you that no original assets or lines have been reused. 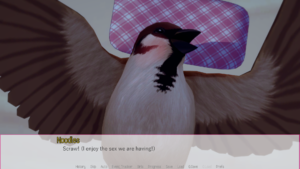 Now, I know what many of you are here for and yes, the new game will feature sexual content as well. This content, just like that of the story, will be fully voice acted.

Thanks for the sponsor, RAID! 500 gems and a new hero Noodles with the PROMO code LESSONSINDOVE #sponsor #ad 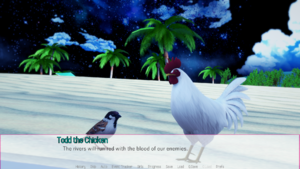 But what would a Selebus game be without moments that tug on your heartstrings? And what better place to do just that than a trip back to the beach from update 0.8.0? Lessons in Dove is not only an immersive action RPG experience but a tour de force through human psychology and the never ending push for "happiness" in the world of Kumon-mi. Here is yet another completely original shot made ENTIRELY for this new game. 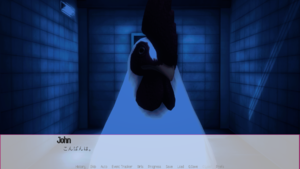 And last but not least, I want to remind everyone that psychological horror still holds an important place in my heart. As such, Lessons in Dove will feature 23 BRAND NEW happy scenes not included in Lessons in Love. The content of these scenes, just like in LiL, will vary greatly. But I believe the image below will give players a good idea of what they'll be getting into.

The game is still quite a ways off, but I want to urge everyone to keep an eye out for it as it will be just as long as Lessons in Love and will likely revolutionize the gaming industry.

I'd also like to thank the developers of Raid: Shadow Legends for completely funding this endeavor. I have no idea where I would be without them.

Thank you everyone, once again, for not only believing in me...but believing in God- the invisible man up in the sky who decides when and where we are allowed to do sex to people.

Also, please consider donating to the game on REDACTED or Chinami will never eat again.