Cookies help us deliver our services. We do not share these cookies with any third party. By using our services, you agree to our use of cookies.
This website might contain content of explicit nature. It may be unsuitable for minors and those easily disturbed. You confirm to be a legal adult in your place of residence and acknowledge the potential risk to your wellbeing by pressing confirmation and browsing this webpage.
Jump to navigation

One of the strongest aspects of the game is the community. A non-exhaustive list of the community's efforts is presented here. 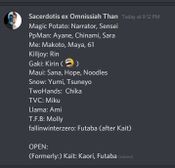 A screenshot of the watchers.
On the 15th of January, a huge amount of players got together to watch the playthrough of the newly released 0.12.0p1 public release. On the fly, a total of approximately 40 players of the Discord joined to have various characters narrated through the scenes. Throughout the event, it was a community effort to make this both hilarious and incredibly cringy. Never the less, even Selebus joined along for a while and got asked a few questions.

The previous banner as made by "Maui Goomba"

A game started by Thanathros, there is an occasional stream on the Discord presenting differing games. These games include both popular and unknown games. As of April 2021, it has been renamed from Mystery Visual Novel Theatre 3000 to Visual Novel Demonstration.

Started in February after the huge success of the narrated Lessons in Love playthrough, Discord User h3rryx gathered people to start a Harem Hotel playthrough. Similar to the LiL one it achieved a lot of acknowledge and participation.
Retrieved from "https://lessonsinlove.wiki/index.php?title=Game/Community&oldid=8477"
Category: